The Syria conflict has been raging for over six years. In times of war, children are among the most vulnerable groups. Even though most will survive the conflict physically, the immediate and long-term well-being of children remains a serious concern for humanitarian organisations, like World Vision.

Conflict situations commonly expose children to extremely stressful and terrifying events. World Vision has heard from children who have escaped Syria, speak about both witnessing and being victims of violence; losing parents and loved ones; and being displaced.

Children also tell us about the daily challenges they face living with those who love them, who are themselves dealing with personal experiences of war and displacement and unable to be as supportive or loving as they once were. These ongoing stresses can have strong and lasting effects on children’s socio-emotional well-being and their growing brains.

And a vast number of children have been impacted by this crisis: more than four million children in need in Syria, and more than one million child refugees now living in Turkey, Lebanon, Iraq, Egypt and Jordan.

Research suggests that the physical consequences of conflict on a child’s brain development can have adverse and marked consequences – with the potential for permanent changes to the brain’s architecture. Without adequate intervention and the presence of protective and caring relationships, Syria’s war could have a lasting impact on children’s learning abilities, memory, social interactions, stress and fear responses, and the ability to control emotions. The experiences of Syria’s war-affected children could lead to a generation of children experiencing long-term mental health, social and economic problems. “My grandchildren have never had a beautiful day in their lives,” says the grandmother of Fatima, 4. “The older girls barely talk, and when other children cry, they curl up with their hands to their ears and rock.” Photo by Jon Warren

Click here for more information on how to help these children cope with stress.

It is a common misconception that young children do not understand stressful or violent events and so are not as affected as adults. But their young minds process much more than is often credited.  World Vision has often observed this in children affected by crises: their developmental milestones can be delayed, their capacity for higher education attainment is jeopordised and their behaviour, emotional attachments and social environments are also impacted. Most often, crises induce severe and chronic stress among children.

Research shows that “toxic stress” – when the stress response system is activated over a prolonged period without the buffering presence of protective and caring relationships – leads to elevated levels of the cortisol stress hormones in the brain. This impacts the brain’s hippocampus and leads to children having learning difficulties, problems with short-term memory and difficulty controlling emotions.

During early childhood, the neural circuits of a child’s brain for responding to stress are particularly vulnerable to prolonged and elevated cortisol levels.  This can have permanent effects on a person’s ability to regulate stress and fear responses later in life and means they are more likely to develop anxiety, depression and a range of other mental, emotional and behavioural disorders. The long-term impacts aren’t limited to the brain. Research also shows a strong correlation between exposure to adverse childhood experiences and higher rates of heart, liver and lung disease in adulthood.

This evidence highlights the need for humanitarian agencies to go beyond delivering food, water and shelter and ensuring a child’s physical safety. Displaced children living in refugee camps, or in isolation from host communities, commonly face boredom, social exclusion and lack of stimulating activities or opportunities for play. On the surface, this may seem a minor concern. However, a lack of adequate stimulation can also be linked to significant neurological shifts in the developing brain.

In childhood, only the neurons and neural pathways that get used are strengthened in the brain, whereas those that are not used die out. The brain is like a muscle. It requires frequent repetitive use and stimulation – through environmental cues, relationships with family, social engagement and education. Neglect and under-stimulation of children affected by conflict can lead to severe impairments in the cognitive, physical and psychosocial development of the child, creating a lasting legacy of war.

This can lead to emotional, cognitive, and behavioural disorders, anxiety and depression, emotional and interpersonal difficulties, and significant learning difficulties.

World Vision prioritises setting up Child Friendly Spaces – safe places where children can play, learn, make friends, develop routines and be monitored for behavioural and emotional issues. The spaces are up and running in Lebanon and are hosting Syrian children.

Our research on Child Friendly Spaces for refugee children living in Ethiopia and Uganda found children participating in such programmes showed more sustained and consistent mental, social and emotional well-being than those refugee children who did not have such opportunities. The research highlights the importance of these spaces in minimizing long-term damage for children.

Children will then only have to deal with tolerable levels of stress – levels that don’t lead to lasting effects on the developing brain.

World Vision is responding to the Syria crisis. In addition to water, health and cash programmes, World Vision aims to scale up its children’s programming. In Lebanon and Jordan we are working to establish or delivering: child and adolescent friendly spaces for recreation and psychosocial support, remedial education initiatives, and maternal and child health programmes that can promote children’s support with their caregivers.

It takes a world to end violence against children! Click here to learn more about the fears and dreams of the Syrian children.

Jessica – the journey of 5 years

More than 5 years ago, I joined World Vision Malaysia. I was excited to be part of this organisation that from my understanding was committed to helping the poor. Little did I know that World Vision’s work carried such depth and breadth worldwide. I am proud to be part of this dynamic community that is dedicated in serving the poor, even though most of us within the Malaysian office work indirectly by working hard to fundraise for our programmes in the field. Over the years I’ve come to better appreciate how the different parts of World Vision help contribute in their own unique ways for the greater good. It is also within this sphere that I’ve been able to grow professionally, socially and spiritually. Here I’d like to share some highlights from the past 5 years that has made it memorable being with the World Vision family.

My various roles in the Programmes department have provided me the opportunity to learn about both sustainable community development and emergency responses. When I first started, one of my first few responsibilities was to monitor the progress of child sponsorship programmes in a few countries. From there I learned about the holistic approach that World Vision uses to work alongside the poor, respecting their voices especially children’s and desiring for genuine transformation in the lives of those World Vision works with. I had the opportunity to visit some of our programmes to which I was able to witness the enthusiasm of communities wanting to improve their lives; discover the passion of committed field staff that have dedicated their lives to the poor; and hoped alongside children that believed that they could have a better future.

As a child sponsor, I’m glad to have the opportunity to journey with my sponsored children and their communities in this process of transformation. Having the privilege of meeting them has continued my desire to see them grow well and be hopeful for the community’s growth in the upcoming years. The connection that I have with a child in a programme allowed my work on community development to come alive, knowing that there are precious lives that really matter behind a report filled with words. 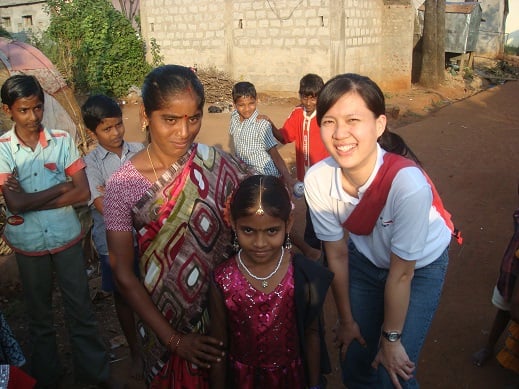 As I moved on to another role that coordinated fundraising efforts for disaster relief, I had opportunities to be deployed to be part of World Vision’s Syrian Crisis Response in the Middle East. There I served as a Programmes Officer, tasked to write grant proposals and reports to donors to fundraise for the needs of the affected community. During both deployments, I worked with international and national colleagues of various backgrounds who came together to use their skills, knowledge and passion to provide humanitarian assistance to those affected. In World Vision, it is amazing that during a time of adversity, a group of people with such diversity can come together to help others from diverse backgrounds.

Only by being part of an emergency response team, working closely with operational staff did I realise the complexity of an emergency response especially for a crisis such as Syria’s. We faced unprecedented challenges and often had to think outside of the box but still meet the needs of the affected children and community, as this was not your average or typical emergency response. This experience brought me one step closer to the field and although I did not work directly with those affected, I was able to see how my desk contribution could still bring some form of relief to those who needed them.

Looking back, it is hard to believe how swiftly five years has passed. This was made easy as I work with a great bunch of people. I have the privilege of working alongside fellow colleagues here and in other World Vision offices that are dedicated to the work at World Vision and have grown together with many professionally and spiritually. Our working relationship and focused goal of helping others has created a bond of friendship that I continue to treasure. This passion and commitment together with fellow colleagues help make the work more fulfilling and meaningful. I hope to continue to contribute in my own ways with my fellow colleagues on the work that World Vision does. And hope many will also see the small contributions we make in the lives of those we work with.