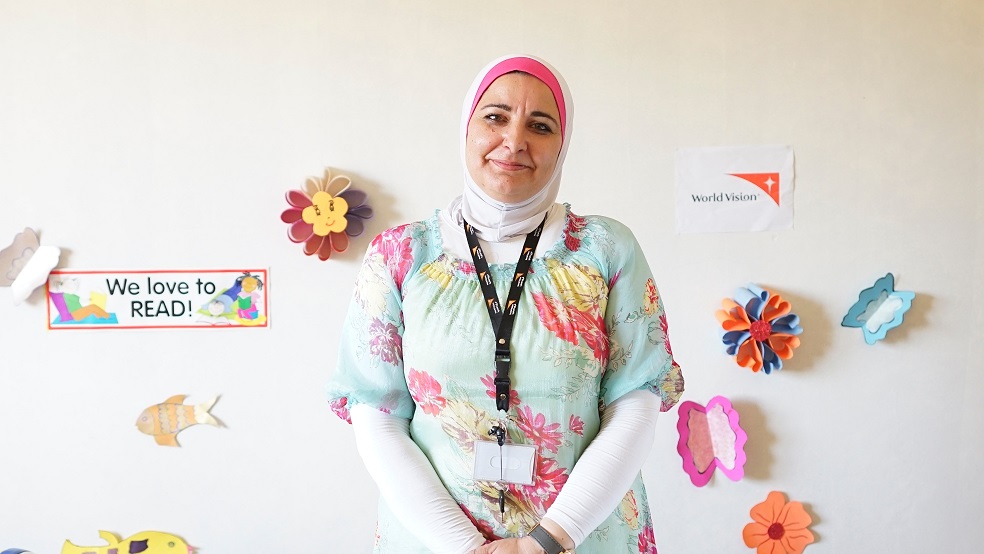 When asking Amira about the reason she works in a CFS, the simple answer that you expect is a typical, “because I love my work”. What one doesn’t know is that Amira finished law school, and had many opportunities to work as a lawyer  but she chose to work with World Vision instead.

Why? ones asks, “The smile of a child is worth everything in this world” Amira says. It’s probably her role as a mother that made her feel this strong attachment towards children and why she has dedicated her life to this cause, or as she describes herself, “I have a soft spot for children, all children”

Every morning Amira wakes up with high hopes about the day to come. Her challenge is to make a change in children’s lives especially the children who attend the CFS. “This is my motivation, this is what keeps me going.” Amira adds.

World Vision works in cycles when it comes to the CFS. Every cycle is for a duration of 3 months. Amira can’t help but talk about how unpleasant is to be attached to children for 3 months and then not see them ever again. “They become part of a bigger family”, Amira tearfully says. Even the children’s families come begging Amira and the team to keep their children for another cycle due to the significant progress they showed!

Amira who is a Lebanese woman in her 40s, lived and survived the Lebanese civil war herself. Seeing the refugees remind her of herself in an earlier stage of her life. She knows exactly how they feel and what they need, and tries as much as she can to help them through their pain. “Because I know for a fact the children are vulnerable and they are the most affected, when it comes to their hygiene, education and physical and mental growth!”

During the the interview Amira explains how beautiful her childhood was and what she tries to do is to ease the childhood of these refugees a little because she believes that every child should live their childhood to the fullest!